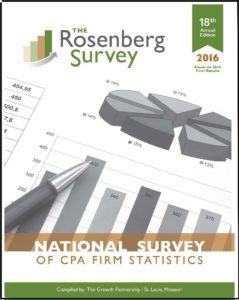 Cynics will say that things don’t change much from year to year in a staid industry like CPA firms.  This is true to some extent.  But the 18th annual edition of The Rosenberg Survey, based on 2015 data, shows quite a few eye-opening findings.

Profits increased by 3.6%, the highest increase since 2007.  Income per equity partner, CPA firms’ most reliable measure of profitability, broke the $400,000 barrier for the first time in history, finishing at $406,000, up from $392,000 in 2014.  The bottom line improvement results from rather dramatic increases in partners’ leveraging their staff.

2015 was the year of dramatically stronger leverage.  Each size range of firms increased their staff-partner ratio from 7% to 14%.  Paralleling this was a slight reduction in the number of partners at firms, despite the revenue growth.

The Rosenberg Survey is compiled annually by The Growth Partnership, a St. Louis-based consulting firm that works with CPA firms in practice growth, leadership development, training and practice management.

Several dozen high-impact techniques for maximizing profitability; 25 best practices for moving firms from good to great; what is NOT important to profitability; BONUS: current CPA industry benchmarks from The Rosenberg MAP Survey.