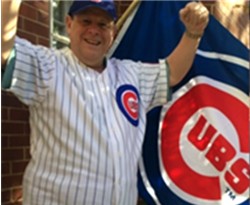 I’m writing this three days after the Cubs won their first World Series in 108 years.  I can’t believe it.  I’m still stunned.  Please indulge me while I devote this week’s post to one of the highlights of my life.

I think of why I became a Cubs fan.  Because my Uncle Bob bought me my first baseball glove at the age of 6 and indoctrinated me into the world of the Cubs.  Then I became infatuated with Ernie Banks, later Ron Santo and the rest is history.

I think of theories explaining the Cubs’ 108 year track record of futility:  (1) Too many day games, which throw off the players’ rhythm.  The Cubs didn’t play their first night game at Wrigley Field until 1988.   They still play half as many night games as all other teams.  (2) Successive owners for 68 of the 108 years were distracted from their primary businesses – running a chewing gum company (Wrigley) and a media empire (Chicago Tribune).  (3) Weak management – doesn’t that describe the failure of ANY organization?  (4) The Billy Goat Curse – LOL. (5) Plum bad luck.

I think of the millions of Cubs fans who lived and died without seeing the Cubs win.

I think of putting an end to perhaps the most infamous joke about the Cubs:  “Anyone can have a bad century.”

I think of what transformed the Cubs into a champion from a laughing stock.  For this, I call upon my long-time friend and colleague, August Aquila, who wrote:  “Strategy.  Competencies.  Passion to win.  Invest in the future.  Teamwork.  Management – the glue that puts it all together.  August, with your permission, I’ll add another – talent development.  Funny how ALL of these are critically important to growing a successful CPA firm.

CPA Firm Management & Governance is a must-read for partners who want to run their firm like a real business.  The book addresses ►Best Practices for managing and structuring the leadership group, ►how decisions get made, ►voting, ►how the Board functions, ►the role and expectation of a partner, ►the Managing Partner, ►organization structures for various firm sizes, ►job descriptions of key management positions, ►partner accountability

I think of my boyhood friend Barry, who earlier in life seemed to be unaware of the word “sports,” and is now as ga-ga over the Cubs as I am.

I think of all the years of losing and coming oh-so-close, especially the 1969 Cubs, who had a commanding 9 game lead over the second place Mets, only to finish a distant second place by 8 games. It was one of the biggest collapses in professional sports history, engineered by their stubborn, tyrannical and ultimately ineffective manager Leo Durocher.

I think of ending (hopefully) the asinine 2003 Steve Bartman incident where a tiny minority of hooligan Cubs fans forced the poor man out of Chicago to save his life.

I think of a graphic I often presented at speeches in the mid-90s.  It showed how long it had been since my three favorite baseball teams won the World Series.  At that point, the Cubs losing streak was 85 years, Chicago White Sox 76 and Boston Red Sox 75.  I asked it as a trivia question and gave a Cubs hat to the winner in the audience.  I’m happy to say I can’t use this graphic anymore because the monkey is off the backs of all three teams.

I think of which baseball teams have now gone the longest without winning a World Series.  See below for the answers.*

I think of my St. Louis Cardinals friends who, justifiably proud of their team having won the second most World Series of all time (trailing only the NY Yankees), can no longer tease me about the Cubs.

I think of the fact that, since 2010, with four championships, the city of Chicago is tied with San Francisco/Bay Area for winning the most among the four major sports. (Cubs 1 and Blackhawks 3)

And most of all, I think of how unbelievably happy I am!!

* Teams that have gone the longest without winning a World Series?  Cleveland, now at 68, Texas, a 1961 expansion team, at 55years and the 134 year-old Pittsburgh Pirates, now at 37 (sorry Omar). 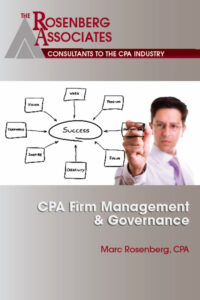 Best practices for managing and structuring the leadership group; descriptions of both partnership and corporate styles; role of the managing partner and firm administrator; decision making; voting; the role of a partner and how the organization changes as the firm grows.

Learn More
Get our expertise delivered to your inbox. Unsubscribe anytime.