Three Main Stages of Evolution: Where Is Your Firm?

There are some products that are so iconic and popular that it doesn’t seem possible that their success could ever be in jeopardy.  Oreos.  The New England Patriots.  Microsoft Office.  It must be wonderful to own and manage businesses like these that seem to run themselves.

THE THREE STAGES OF A CPA FIRM’S EVOLUTION

The firm is newly formed and starts out in the survival mode.  The owners work their butts off, working long hours, doing whatever it takes, not always having a formal strategy and usually not worrying much about allocating the paltry income they earn as they build a firm.  This stage often lasts 5-10 years.

The firm has essentially “made it” after many years of hard work and sacrifice.  Their metrics, especially their income, is comparable to other successful firms their size in their market.  The firm grows.  The quality and size of the clients improves.  Sophisticated management practices are installed such as a managing partner, an executive committee, a firm administrator, performance-based partner compensation, a marketing plan, leadership development, state of the art technology and many others.

While this stage is enviable, danger lurks ahead in the form of complacency.  This is where Second Stage firms diverge into two types.

The first type are those firms who are never satisfied and live and breathe this quote from the former Coca Cola chair, Roberto Goizueta: “Challenging the status quo when you have been successful is difficult.  If you think you will be successful running your business in the next 10 years the way you did the last 10 years, you’re out of your mind.  To succeed, we have to disturb the present.”

Then there are those Second Stage firms who are at the far right of the “maturity/good times” axis on the graph at the beginning.  They are moving dangerously close to becoming Third Stage firms – complacent firms. The partners love their work and their clients.  They are earning way more money than they ever thought they would.  Revenue grows most years with less and less effort.  Life is good.  But the partners aren’t as hungry as they used to be.  It’s not like they wake up every morning and say, “I’m going to be complacent today.”  It evolves very slowly and subconsciously.  Though they would like to make more money, they aren’t willing to work harder, push themselves or change.  They aren’t willing to change their routines or go outside their comfort zones.  Like the pull of gravity, they get drawn to the …

When too much status quo and complacency set in over a prolonged period of time, stagnation begins to rear its ugly head.  The partners, in their 30s and 40s at start-up, are now in their 50s and maybe a few are in their early 60s.  Revenues flatten out.  Turnover rises.  The firm is short on partner-potentials.  Coming to work is no longer as much fun as it used to be.  The firm has gone stale.

I once facilitated a partner retreat of a 6-partner, fourth generation firm.  The firm was deep into the third stage.  Revenues were flat or declining for the past five years.  I asked the partners to tell the group what they were doing to bring in business.  One after the other said the same thing: “I’m not doing anything.”  I told them that I think I figured out why their revenue was declining.

I worked with another similar firm where all the partners confessed to doing nothing to doing business.  When I asked one of the partners what he was doing to bring in business, his response was – bless his honesty – Why should I if they don’t?

WHAT’S THE BEST WAY TO SOLVE A PROBLEM – ANY PROBLEM?

Don’t let it become a problem in the first place!  From the time when a firm emerges into the second stage, it must be managed with eyes on the future, not the present.

A few examples.  Have a vision of where you want to be and establish partner accountability for getting there.  Embrace the belief that your people are just as important as your clients…and truly act on it.  Proactive marketing.  Invest in leadership development, especially staff mentoring.  Establish a definable culture and live and breathe it.  Develop new services, especially consulting.  Specialization.  Use technology to drive your firm.  Invest a healthy share of today’s profits to build the firm of tomorrow.  Performance-based partner compensation.  And finally, invest in strong management and leadership because this is what drives all the others.

Anyone reading this has seen these before.  You know what you need to do.  The challenge is to take these words on a piece of paper and make them come alive and dedicate your firm to proactively executing them.

Of course, Oreos, The New England Patriots and Microsoft Office don’t run by themselves.  The makers of Oreos constantly come up with new baking methods, finding new and better sources of raw materials, replacing disappearing distribution channels with new and better ones.  The New England Patriots keep scouting and drafting new talent, devise new plays while discarding ineffective ones, replacing coaches as people move on.  And Microsoft Office- although they have had a virtual monopoly for their software for 20 years or more – constantly pushes their software development team to finds ways to improve the products by exploiting technology innovations.

Best of luck to your firms in remaining Second Stage firms! 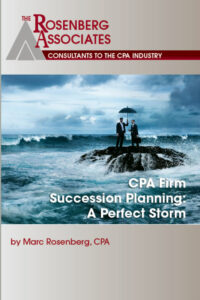 Step by step approach; challenges for older and younger partners; overarching initial decisions; leadership development and bringing in new partners; managing partner and client transitions; how firm governance must change as the firm grows; mergers as an exit strategy.