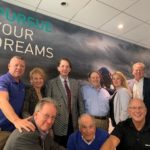 Well, the CPA industry consulting luminaries of the New Horizons Group may not be of the same ilk that Washington, Jefferson and Madison were, but when they talk, people listen.  And the people in the room – Jim Bourke, Gale Crosley, Chris Frederiksen, Carl George, Roman Kepczyk, Allan Koltin, Angie Grissom, Bill Reeb, Marc Rosenberg, and Jennifer Wilson – made things happen.

Buyout valuations will probably decline due to the likelihood that audit revenue streams will have a shorter life as a result of coming technologies.  It’s possible that the audit portion of a practice may be valued at perhaps 60% of revenue vs. the 80-100% of the past.  A companion thought by buyers is to be less interested in sellers with a heavy audit practice.

An increasingly prominent strategy that firms are pursuing is to identify new revenue sources to replace the expected decline in compliance work caused by the coming impact of disruptive technology advances. Firms need to bring in the CEOs of their best clients and ask them what consulting and non-traditional CPA services they would buy, in the words of Jim Bourke, “even if it’s a car wash.”

Bill Reeb, Vice Chair of the AICPA, gave a stunning presentation on the future of our industry.
Everything is changing so fast. In 2006, the largest corporations were dominated by energy. Now it’s technology companies.Accountants and auditors are now ranked 7th in a list of top 10 declining jobs. In the top 10 emerging jobs, six are technology positions, including the top two – data analysts/scientists and AI/machine learning specialists.

Firms never been more successful than they are today, but those who fail to embrace technology and change with the

Technology changes will reduce the demand for labor, reducing the dire need for staff for the first time in thirty years or more.  Robotics is predicted to automate or eliminate up to 40% of basic accounting work within the next several years.

Baby Boomers are retiring later, thereby putting off their retirement.  We’ve shifted succession.  When these firms eventually do go out of business, the profession may go from its present 44,000 firms to half that.  Five years ago, AICPA research showed that more partners will retire in the ensuing 10 years than the previous 30.

Today’s accounting majors must be technologically trained to be relevant in the near future.

CPA Firm Mergers: Your Complete Guide was written because every year, hundreds if not thousands of mergers – up, down and sideways – are taking place but relatively few buyers and sellers have much merger experience in one of the largest transactions their firms will ever be a part of.  The book addresses ►the keys to successful mergers, ►the 21 steps in the merger process, ►how to assess cultural fit, benefits of merging upward, ►why buying a firm for one times fees is a steal, ►what larger firms should expect to see from smaller firms & vice versa, ►how to negotiate a merger – from both buyer and seller view, ►14 things the letter of intent should address, ►data and due diligence

80% of firms won’t get it and will be gone.  Affluence is a huge problem.  Partners will do what they are paid for. “When you’re making $500K a year and have been doing so for a long time, it’s hard for some to get off their butts and change their ways.” Boomers won’t make the changes because it’s not in their DNA.  New, younger MPs are much more likely to lead the change.  Firms’ strategic plans must have a huge technology component and must be aligned with partner comp.

Technology is the engine for growing advisory services.  Firms are increasingly changing their tag lines, leading with consulting, then accounting and tax.

In succession planning, firms are increasingly putting very specific client transition requirements and penalties for non-compliance in their partner agreements.

Get our expertise delivered to your inbox.