Elected or Appointed? A Choice for Your Compensation Committee

Compensation committees are the best of several common partner compensation systems for achieving a balance between recognizing traditional production accomplishments and rewarding intangibles. 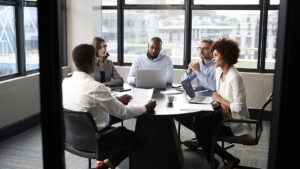 The compensation committee (CC) approach aligns the firm’s strategic plan and vision with how partners are evaluated and how they are compensated. It motivates partners to produce what the firm needs them to produce. At most firms, there is a disconnect between these three functions. But at the better-managed firms, they are integrated.

Put another way, all CC members MUST be credible in the eyes of the other partners. Many firms have a very productive, competent partner that the others are glad to call “partner,” yet, because of the nature of this person’s personality or perhaps due to some past transgressions, the others don’t wish to entrust their compensation with this person.

I was asked by an 11-partner firm to attend their CC meeting. A lot of time was spent discussing one partner in particular, who had severe performance issues. This partner not only had production-related deficiencies but interpersonal problems as well. This partner exhibited some strange behavior with several clients that led them to call the MP and lodge complaints. This partner was also abusive to staff on a few jobs.  The discussion of this partner’s evaluation was so serious that the CC debated whether or not to terminate the partner deciding, in the end, to give the partner one more year to turn things around.

A month after this meeting, the firm held elections for the CC because one member was required to come off the committee due to a rule designed to give every partner a chance to serve on the CC. To the consternation of the CC, the partner group, seven of whom were blissfully unaware of this partner’s serious shortcomings, elected the problem partner to the committee!

I advised the MP that he must find a way to prevent this problem partner from serving on the CC because it violates a fundamental principle of operating an effective CC: All partners must be credible in the eyes of the partner group.

The MP convened a meeting of the previous CC to get their support for overruling the election results, which he was able to do. Next, he met with a few other influential partners and obtained their support as well. Armed with the support of a strong majority of his partners, the MP never made public the fact that (1) this problem partner was elected to the CC and that, (2) he overruled the election of the problem partner. The partner who garnered the next highest amount of votes became a member of the new CC.

If your firm has chosen to elect CC members, make sure the MP is still overseeing the process and able to step in if needed in a situation like this. 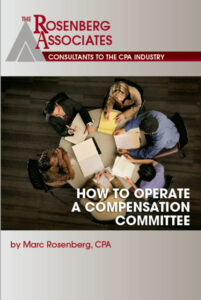 How to Operate a Compensation Committee

Compensation Committees are THE most effective system used by multi-partner firms to allocate partner income. How they work; best practices; structuring compensation; open vs. closed and the roles of goal setting, performance criteria, strategic planning and core values.