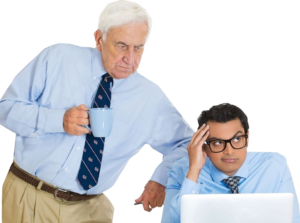 Last week, we received several comments to our post on mandatory retirement, evidence that this concept is indeed controversial. This week, let’s drill down further.

My mother Florence was legendary in our family for uttering phrases oozing with wisdom, though she rarely created them.  One was:  “If you saw a bunch of people jumping off a skyscraper, would you?”  Well, just because the “big” firms have mandatory retirement, does that mean your firm should blindly follow suit?

Last week I defined the two camps in this war:

It also formalizes firms’ commitment to continuous leadership development and succession planning. The lack of such a policy emboldens the resolve of unproductive, aging partners to stay as long as they want and makes it awkward and difficult for younger partners to gracefully retire them.

Mandatory-retirement-is-wrong camp:  Small business owners have the inalienable right to decide when and how they retire.  They don’t want to be forced out. They reason “as long as I’m healthy, sharp and productive, why should I retire before I’m ready?”

We received a comment from the MP of a successful $10M in the Midwest that is profitable, growing and progressively managed, which does not embrace mandatory retirement.

You frame the use of a mandatory retirement age as being “good for the firm.” I respectfully disagree in that in it not necessarily good for the firm. The use of mandatory retirement promotes short-term thinking and an unwillingness to invest in recruiting, staff development and infrastructure to build a sustainable firm. One of the biggest problems and biggest turn-offs to younger partners and staff is that the accounting profession is often dominated by short-term thinking. It’s all about making money today at the expense of tomorrow.

In our firm, we do not have a mandatory retirement age.  I have already identified my successor (this MP is in his mid-50s) and probably will transition a large part of my client responsibilities in the foreseeable future.  At the same time, we admitted new, internally developed partners with zero buy-in, bought firms where the real payoff is years away and made investments for years that are now paying off handsomely.  We made these investments all along.  We don’t need a mandatory retirement policy to make the right decisions for the future.

One might think the term progressive could never be applied to a firm that lacks a mandatory retirement policy, but as this MP’s remarks attest, the two are not mutually exclusive. Well said, my friend!

Get our expertise delivered to your inbox.